A Magnate’s Green Epiphany, Atlanta’s Own Passes This Week.

Ray C. Anderson, a leading green business advocate and founder of Interface, one of the world’s largest carpet manufacturers,died this week. He’d spent the last 17 years promoting the benefits of sustainable business practices, not only for protecting the environment but for boosting the bottom line. 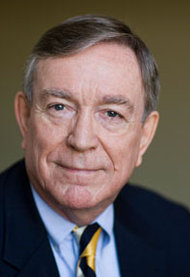 His “epiphany” came in 1994, when he read Paul Hawken’s “Ecology of Commerce.” He documented his transformation from plunderer to protector in his book “Mid-Course Correction: Toward a Sustainable Enterprise,” which is now required reading in every green M.B.A. program.

Mr. Anderson wasn’t the first to embrace green business practices like waste reduction, biodegradability and recycling, but he was the first to apply them in a large-scale industrial company, according to L. Hunter Lovins, president of Natural Capitalism Solutions, a sustainable business consulting group.

“He was the first to prove that a corporate-wide, systemic commitment to sustainability could increase profitability,” said Ms. Lovins, a longtime friend and associate of Mr. Anderson. “Before him, behaving in ways which are responsible to people and the environment were seen as costs for the business rather than a source of profit.”

Besides transforming his own business, Mr. Anderson went on to influencecorporate giants like Wal-Mart. He served on the President’s Council on Sustainable Development during the Clinton administration. And he established the Anderson-Interface Chair in Natural Systems at Georgia Tech, his alma mater.

You can read a more detailed account of Mr. Anderson’s life and influencehere and watch him deliver his message in a 2009 TED talk here.