Dezeen AIA names top ten green projects Dezeen News: the American Institute of Architects (AIA) has named its top ten sustainable projects of the year, including a university building made from timber, concrete and Corten steel in Minnesota (above) and a series of prefabricated houses in Tennessee … 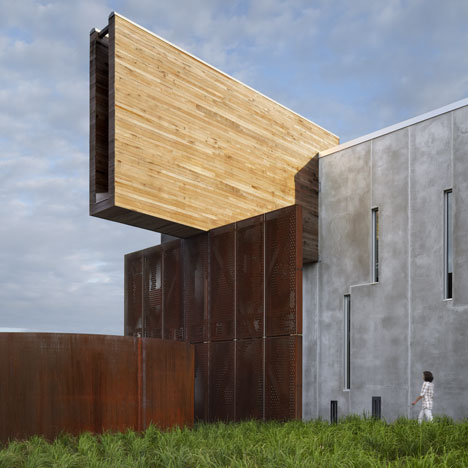 News: the American Institute of Architects (AIA) has named its top ten sustainable projects of the year, including a university building made from timber, concrete and Corten steel in Minnesota (above) and a series of prefabricated houses in Tennessee.

The annual COTE Top Ten Green Projects programme, intended to promote environmentally responsible architecture, is organised by theAIA‘s Committee on the Environment (COTE) and is open to all architects licensed in the US. This year’s top ten projects were selected by a jury of architects and experts.

Brooks + Scarpa Architects is recognised for Yin Yang House, a combined home and workplace in California that produces more energy than it consumes, while Philadelphia-based KieranTimberlake is awarded for Charles David Keeling Apartments, a courtyard housing development in the same state.

Three more mentions go to projects in California: to the daylit and naturally ventilated Marin Country Day School in Corte Madera, a high-density housing community for senior citizens in Oakland and a 13-storey office building for the San Francisco Public Utilities Commission.

Other project in the top ten include a warehouse and brewery that Lake Flato Architects converted into a mixed-use complex of shops, offices and apartments in San Antonio, an office block on an urban brownfield site in Milwaukee, plus a Seattle office block for the US Army Corps of Engineers, which was planned and designed in 18 weeks by ZGF Architects.

The AIA also recently announced the ten winners of its annual Small Project Awards, while earlier this year the organisation revealed 28 winners of its Institute Honor Awards, including projects by OMA and Kohn Pedersen Fox. See more architecture in the US.

The American Institute of Architects (AIA) and its Committee on the Environment (COTE) have selected the top ten examples of sustainable architecture and green design solutions that protect and enhance the environment. The projects will be honored at the AIA 2013 National Convention and Design Exposition in Denver.

The COTE Top Ten Green Projects program, now in its 17th year, is the profession’s best known recognition program for sustainable design excellence. The program celebrates projects that are the result of a thoroughly integrated approach to architecture, natural systems and technology. They make a positive contribution to their communities, improve comfort for building occupants and reduce environmental impacts through strategies such as reuse of existing structures, connection to transit systems, low-impact and regenerative site development, energy and water conservation, use of sustainable or renewable construction materials, and design that improves indoor air quality. 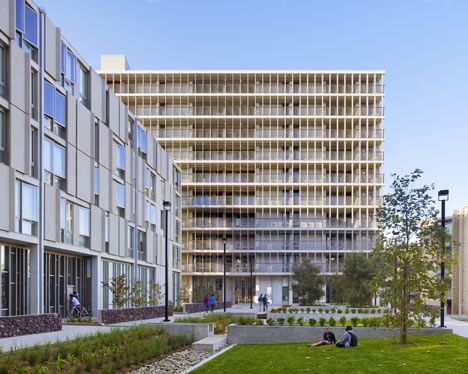 The design response was to tune the design to capitalize on the favorable environmental features, while moderating or eliminating the undesirable ones. This led to a building envelope that uses thermal mass to buffer temperature changes, minimizes solar gain, and naturally ventilates. Water scarcity is managed through a comprehensive strategy of conservation and reuse, including on-site wastewater recycling. A vegetated roof, an unusual feature in this dry climate, absorbs and evaporates rain that falls on that portion of the building, with overflow directed to the courtyard retention basins. 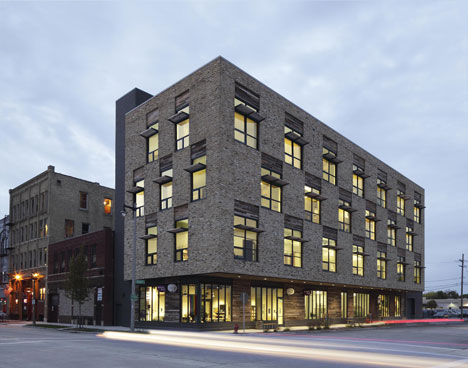 This project cleans up a brown-field site that was difficult to develop. The continental climate provides large swings in temperature and humidity which necessitated passive strategies such as: southern facing windows with sun screens that maximize insolation of the sun during cooler months and operable windows that let cool fresh air into the building, allowing the users to effectively “turn off” the heating and cooling systems during swing months. To gain the most efficiency from the HVAC systems, the project utilizes a geo-thermal system, drilled directly below the building, which stabilizes the temperature of the conditioned water used to heat and cool the spaces. 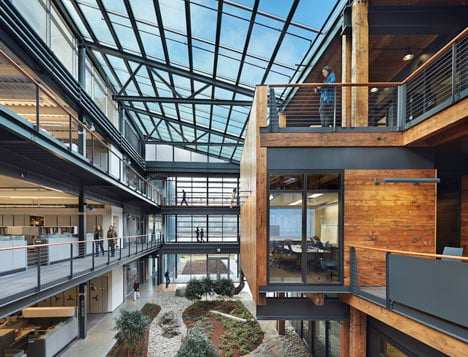 Current energy models predict the building to operate at a “net zero capable” Energy Use Intensity (EUI) of 20.3 kBtu/SF/year, performing 40 percent better than ASHRAE 2007. The building will earn an ENERGY STAR Score of 100 and comply with 2030 Challenge goals. The project is one of the first in the region to use structural piles for geothermal heating and cooling, as well as a phase change thermal storage tank. Two new products, chilled sails and open office lighting, were developed and manufactured specifically for this project to help achieve aggressive energy targets. To optimize the use of the available reclaimed timbers, the team designed, tested, and constructed the first wood composite beam system in the U.S. 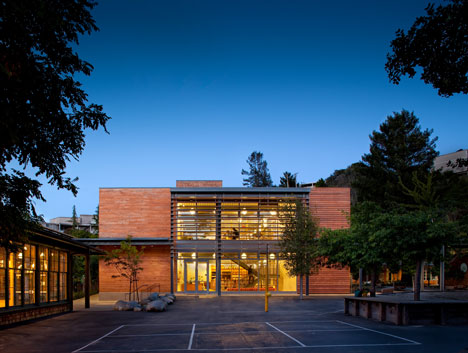 Around 95 percent of spaces are daylit and naturally ventilated. Night time operation of the cooling tower and an underground water tank provide active thermal storage, for daytime cooling. The design of the building envelope includes air tightness detailing and the use of fire treated wood stud framing to minimize thermal bridging. To provide an excellent thermal envelope, walls were constructed with 2×8 and 2×10 wood studs (rather than conventional steel studs) to minimize thermal bridging and provide ample insulation. This building is designed to achieve an EUI of 6.74 kbtu/sf/yr including the energy generated by the PV array, and to use less than half as much energy as California’s strict energy code. 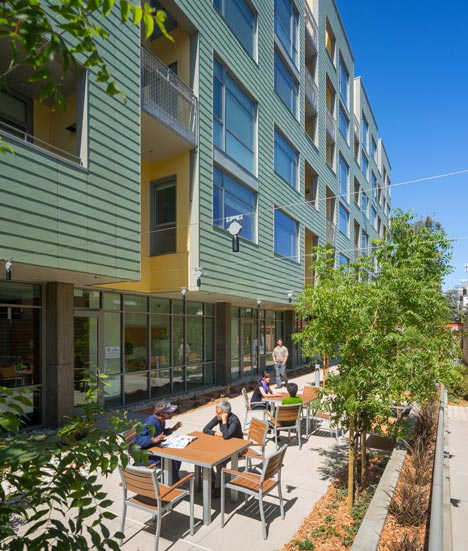 The roof area has a cool roof surface and is devoted to both a solar water panels and photovoltaic panels. Ground floor spaces benefit from the full height storefront system that similarly provides ample daylight and transparency to the outdoors. These windows are also thermally broken and have high performance glass. The windows are shaded in summer by either exterior sunshades or an overhang from the second floor. With no mechanical air conditioning, cooling is achieved by a low volume ventilation system augmented by ceiling fans in each habitable room. The site has a 94 walkability rating, an 82 transit rating and an 86 bike friendly rating from walkscore.com. 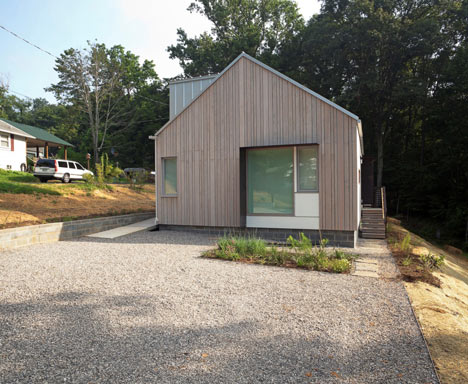 At 1008 square foot, this production house is less than half the size of the median house. “Rightsizing” reduced material and operational loads and costs, and shifted funds to quality design and construction, passive strategies and high-efficiency systems. The dormer and skylight are placed so daylight is reflected and diffused. No-VOC paint color is warm white with a punch of red-orange hidden within the swing space to produce a warm glow from reflected light. Low-E glass and translucent blinds provide further control over heat, glare and privacy. All interior rooms are daylit throughout the day. Electric lighting is integrated with cabinetry and includes low-energy LEDs. 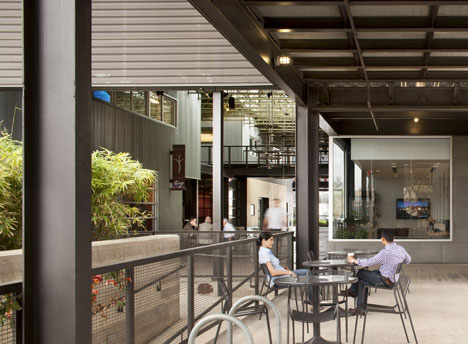 This 67,000 square foot LEED Gold warehouse includes passive solutions including open breezeways, which were carefully oriented to prevailing summer breezes and supplemented with large ceiling fans. Large light monitors oriented to the north provide natural daylight to the breezeways, while the south wall of the cupola is open to allow hot air to escape as it rises. 100% of the rainwater captured from roofs coupled with recycled water, is used to irrigate the landscaping on site, eliminating the need for potable irrigation water. Highly efficient ductless minisplit systems were installed to condition indoor spaces. These systems can serve multiple zones using only one outdoor unit, and allows individual control of the air conditioning in each room. 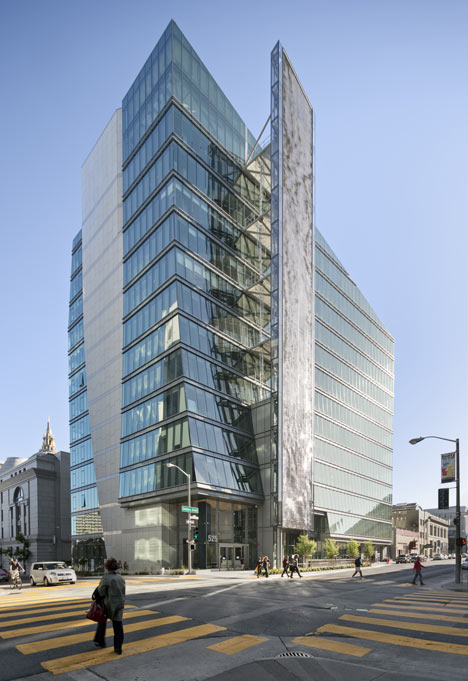 The building is designed to achieve LEED Platinum certification and will exceed California’s recently-instituted Title 24 requirements for energy efficiency in new office buildings by 55% according to SFPUC estimates. The building will produce up to 7% of its own power needs from renewable photovoltaic and wind sources; will provide $118 million in energy cost savings over 75 years; and will require 45% less energy to illuminate the interior through daylight-harvesting and advanced lighting design, compared to typical Class A office buildings. The SFPUC consumes 60% less water than similarly sized buildings and is one of the first buildings in the nation with on-site treatment of gray and black water. 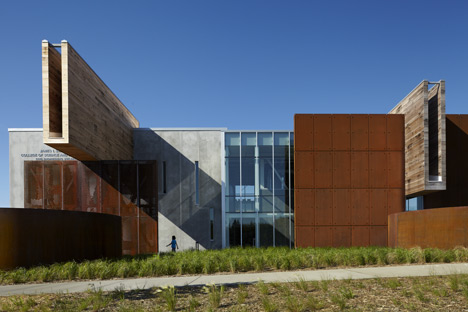 As an educational facility whose curriculum directly impacts the natural environment, the building overtly exposes sustainable systems and materials. 73% of the site is devoted to pervious materials and landscaping, reducing site detention requirements. An extensive green roof with native plants covers 22% of the roof, reducing storm water rates and filtering impurities. Storm water is directed from the roof to three scuppers and into above ground cylinders filled with rocks for filtering. Storm water eventually makes its way to a French drain system of underground water storage pipes for retention. The site lighting is minimal, and all fixtures are equipped with full cut-off optics. 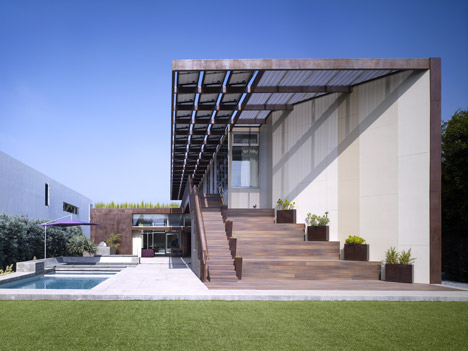 This sound passive design strategy combined with a very tight perimeter building envelope and other active sustainable features such as the 12kw solar system make this home a zero energy consumption home. It produces 100% of its energy needs and since completion, has never received an electric bill. The design maximizes the opportunities of the mild, marine climate with a passive cooling strategy using cross-ventilation and a thermal chimney. A large cantilevered roof overhang shades all the bedrooms from direct sunlight while providing ample natural light and ventilation. The project also has green roofs, its own storm water retention system and retains 95% of roof storm water on site.