In a Climate Quest, the Roof as White Knight 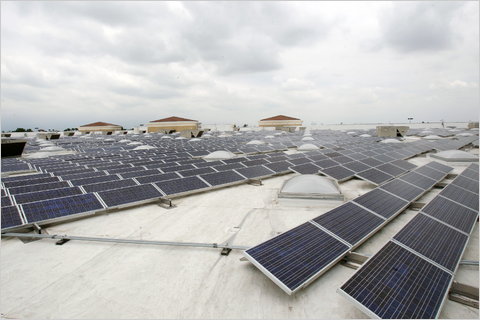 J. Emilio Flores for The New York Times A Walmart store in Chino, Calif., relies on both its white roof and solar panels for energy savings.

Since he took over as energy secretary last year, Steven Chu, a Nobel laureate in physics, has urged Americans to help cool the planet by painting their roofs a lighter color that reflects sunlight.

“When you’re thinking of putting on a new roof, make it white,” Dr. Chu told Jon Stewart’s “Daily Show” audience in 2009. “It costs no more to make it white than to make it black.”

Now he is following his own advice: on Monday, Dr. Chu directed all Energy Department offices to install white roofs during new construction, when replacing old roofs and wherever an installation is cost-effective over the lifetime of the roof. The secretary urged other federal agencies to follow suit.

“Cool roofs are one of the quickest and lowest-cost ways we can reduce our global carbon emissions and begin the hard work of slowing climate change,” he said in a statement.

As climate change remedies go, whitening roofs is the proverbial low-hanging fruit, many studies show. As my colleague Felicity Barringer reported last year, lighter-colored roofs not only reduce air-conditioning bills for individual buildings but also lessen the “heat island” effect, in which the ambient air in cities is hotter than that of surrounding regions because of a high concentration of dark, heat-absorbent surfaces like asphalt.

A 2009 study by the Lawrence Berkeley National Laboratory’s Heat Island Group found that retrofitting 80 percent of air-conditioned buildings in the United States with white roofs would save $735 million annually in reduced energy bills while achieving an emissions reduction equivalent to removing 1.2 million cars from the road.

Another study published this year by researchers with the Berkeley lab used global climate models to determine the cooling benefit of increasing the albedo, or reflectivity, of both roofs and roadways in large cities. The study found that increasing the reflectivity of those surfaces in urban areas with a population of over one million would offset the heating effect of 1.2 gigatons of carbon dioxide emission annually, the equivalent of taking 300 million cars off the road for 20 years.

Original post by John Collins Rudolf, NYT
In a Climate Quest, the Roof as White Knight