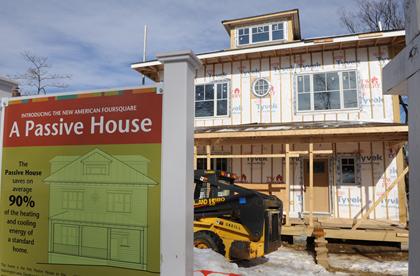 Heat your home by throwing a dinner Party?  This concept may sound bizarre, but it’s feasible in cutting-edge green homes that are so well-insulated, they don’t need a furnace or boiler. They’ll stay warm simply with body heat. A hairdryer might also suffice. 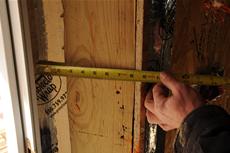 “It’s like living in a glass thermos,” says John Eckfeldt, a physician who built one of these “passive” homes in frigid Isabella, Minn. He says the inside temperature is so even that if he sees snow falling, he’s surprised to realize it must be cold outside. 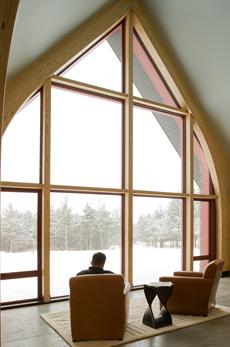 The windows never feel cold, nor do the concrete floors, even though they don’t have in-floor heating, says Joe Turner of his “passive” home in Salt Lake City. “The house is also super quiet.”

The passive house movement, popularized in Europe, where thousands of such homes have been built, is starting to catch on in the United States as consumers look to lower their utility bills. These homes don’t require pricey solar panels or wind turbines but focus on old-fashioned building science to reduce energy use by up to 90% less energy. 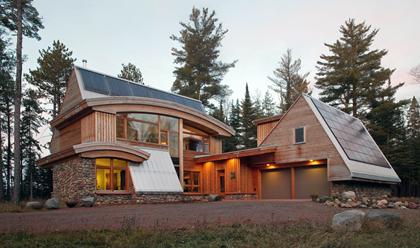 They’re different from the “passive solar” homes of the 1970s, which used a lot of south-facing windows for heating, because they emphasize other features: thick walls and roofs (often at least a foot) and triple-paned windows, as well as efficient appliances and lighting. The secret is tightness, achieved via superior insulation and air sealing. A mechanical system brings in fresh air, heating or cooling it as needed.

Few U.S. homes, only a dozen so far, have obtained certification from the Passive House Institute US, a private Illinois-based group that bases its rules on the German Passivhaus standard.

Yet, dozens of homes nationwide are now being designed to meet its strict energy efficiency requirements.

“It’s growing exponentially,” says Tom DiGiovanni, who heads the Passive House Alliance, a group established last year to promote the standard. He says more than 400 people are now trained as passive house consultants, up from 20 two years ago.

“It feels like we’re almost at a tipping point,” he says, citing factors such as high energy prices and the Obama administration’s push for energy efficiency. “It’s like the perfect storm.”

“It could be mainstream five years from now,” says Nate Kredich of the private U.S. Green Building Council, which has its own green rating system. He says its popularity may depend on whether production builders jump on board and prices fall.

How much more?
Passive homes cost 6% to 12% more than other new homes, but they recoup that premium in lower utility bills in seven to 12 years, DiGiovanni says.

“The biggest extra cost is the windows,” he says, noting that U.S. companies have only recently begun making triple-pane windows, so some builders had to import them. California-based Serious Materials makes ultra-efficient dual-pane windows that several U.S. passive homes have used.

Still, he says passive homes can be built on a budget, especially in multi-unit buildings. He says several affordable housing projects, including a 48-unit site in Urbana, Ill., are underway.

“It’s innately reasonable,” says architect David Peabody, who designed the first passive house in the Washington, D.C., area. He says the extra cost was about 8%, but the annual utility bills for the 4,200-square-foot home are projected at less than $750. U.S. households spent an average of $2,639 on energy costs for homes that size in 2005, the most recent year for which U.S. government data are available.

In Lafayette, La., architecture professor Corey Saft estimates his solar-equipped passive home cost about 10% more than a regular new home. He built it for $110 per square foot, which he says is inexpensive for a custom home. Census Bureau data indicate new homes in the South — many by production builders — sold for an average of $76.77 per square foot in 2009.

“It’s the most cost-effective way of accomplishing the least energy use,” says architect Dennis Wedlick, who designed New York state’s first passive house. He says there was no premium for his Hudson Valley project, because he used Serious’ U.S.-made windows and offset the cost of extra insulation by using a tiny, inexpensive ductless heating and air conditioning system.

Yet, Wedlick sees potential obstacles. “It could take a long time to get certified,” he says, adding the program is being thoroughly developed but still lacks the staff to handle the booming demand.

Certification can cost several thousand dollars. The Institute charges about $1,000 to review an application for a 2,000-square-foot home, but that doesn’t include the cost of hiring a consultant to advise on design and an independent auditor to verify the home’s efficiency.

Another challenge could be aesthetics. Most U.S. passive homes have limited windows and a boxy shape, which is the easiest geometry to keep insulated and highly energy efficient.

Homes with curves and larger footprints require extra insulation and sealing that add to the cost. Eckfeldt says his stylish passive home, with huge curved windows and upscale finishes, cost $450 per square foot.

Just how tough is the standard? John Semmelhack, a passive house consultant in Charlottesville, Va., reviewed one home designed to earn the top rating from the U.S. Green Building Council and determined it wouldn’t qualify as a passive house for several reasons: It has too many windows; the windows don’t absorb enough solar heat; and the L-shaped, courtyard house isn’t a simple cube.

“The hardest type of house to meet the passive standard is a small detached single-family home,” says Semmelhack, adding it’s easier to meet it with larger commercial spaces, schools or — as is commonly the case in Germany — apartment buildings. He designed a school in Charlottesville that will soon be certified; two other U.S. schools have already passed the test.

Climate could also be a challenge for the passive standard.

“It favors a (temperate) climate like Germany’s,” says Kevin Morrow of the National Association of Home Builders (NAHB). He says U.S. weather is much more diverse — some tropical, some Arctic and some a mixture of both.

Regardless of location, passive homes cannot have a heating or cooling load above 4,755 British thermal units per square foot, which is about one-tenth that of homes built to current U.S. codes. They must also be virtually airtight, which requires meticulous sealing of ducts, joints and hairline cracks.

“You can’t greenwash this. You have to be a terrific builder to do this,” Wedlick says.

To avoid overheating in warm areas, passive homes need exterior shading, ventilation and a cooling system, says German-born architect Katrin Klingenberg. She built her own home in Urbana to the Passivhaus standard in 2002 and opened the U.S. institute in 2008.

Kredich says the U.S. Green Building Council may do the same.

Unlike those programs, which also rate homes for water conservation, renewable building materials and other aspects of green building, the passive standard looks only at energy efficiency.

The U.S. Department of Energy did some of the original research on it decades ago, but with energy prices lower in the U.S. than Europe, the standard didn’t take off until German physicist Wolfgang Feist founded the Passivhaus Institute in Darmstadt, Germany, in 1996.

One of the standard’s benefits is that it makes it relatively easy for homes to become net zero energy, which means they produce as much power as they use, says David Johnston, author of Toward a Zero Energy Home. Because passive homes don’t use much energy, he says, a small solar energy system will often be enough to meet their needs.

Saft made his passive home net-zero by adding a three-kilowatt solar array.

So did Eckfeldt and his wife, architect Nancy Schultz, who designed their Isabella home, using photovoltaics to offset their energy needs.

Yet, they can survive even the worst of winter without any help from the sun or backup heating. In December 2009, their house’s boiler didn’t work for 10 cloudy days when they were out of town and outside temperatures dipped well below zero.

How cold did it get inside? The thermostat held at 51 degrees.