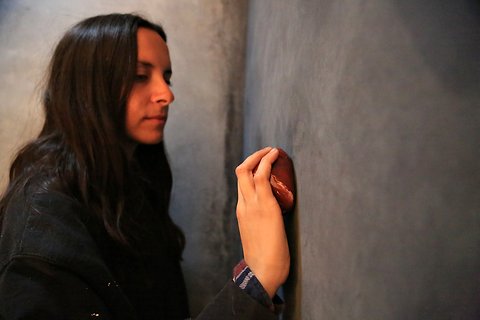 Rob HarrisCourtney Boyd, a Community Rebuilds volunteer, polished a tadelakt shower wall with a stone in the master bathroom of a new straw bale home in Moab, Utah.

What do the Sistine Chapel, the Brooklyn Bridge, the Appian Way and the outside of the straw bale house we’ve been buildinghave in common?

According to Ryan Chivers, a natural plaster guru, they’re all made with lime.

“I’m a big time research geek, so I spent a lot of time on the Internet researching stuff and reading books,” said Ryan, who runs Artesano Plaster  in Boulder, Colo.

He grew up working for his family’s drywall company in Salt Lake City.  There he learned to use a hawk and trowel, the traditional tools of the plasterer. Then he became involved with tree sitters fighting clear-cut logging in British Columbia.

“That kind of set me off on, ‘Why are we cutting down all these trees?’  ‘Because we are building all these houses in the states.’  So I thought I could take some action on that front and got into natural building,” Ryan said. “Because I was doing drywall, the plastering thing was a natural transition.”

Fourteen years later, Ryan was in Moab, Utah for a three-day workshop with our Community Rebuilds volunteer crew.  He taught us how to make shower walls by using an ancient Moroccan lime plaster technique called tadelakt.

In the process, we also learned about Ryan’s infectious enthusiasm for lime and his belief that American builders have forgotten one of their best natural resources.

“Portland cement was invented in 1830, so everything before that is lime of some sort,” he said, referring to the crucial ingredient in modern concrete, which has come to dominate the building trades.

When mixed with water and sand, crushed lime can be used as brick mortar, cement, or plaster.

The roads built by the ancient Romans, the Erie Canal, the mortar holding together the granite blocks of the Brooklyn Bridge, and the pedestal of the Statue of Liberty were built using lime as a cement. 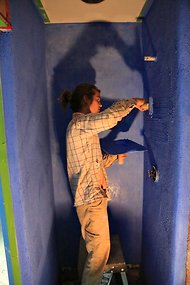 Rob HarrisTyler Shean sponged a layer of lime plaster onto the shower in the second bathroom.

The frescoes of the world’s greatest artists, from Leonardo’s  “Last Supper’’ to Diego Rivera’s murals are actually pigments absorbed into lime plaster walls, Ryan pointed out.

He attributes the demise of lime in construction  partly to the way that  thePortland Cement Association, a  trade group,  muscled  its competition out of the market in the 1800s.

“In the space of a generation or two, they basically completely got rid of lime,” Ryan said.  “And so now, if you talk to a mason or a plasterer, they don’t even know that you can just use lime.”

The other reason Portland Cement has largely replaced lime, he said, is that it cures stronger and faster, allowing for the design of larger structures that can be built more quickly and cheaply.

“You can’t make a freeway overpass out of lime,” Ryan said. “You wouldn’t really pour a foundation for your house out of lime.” Where it excels, he said, is as a plaster.

“When you think about all the buildings in Europe, or anywhere where it’s old and they have that really beautiful patina charm, it’s all lime,” he said.

At the same time, Ryan says, lime performs the impressive feat of sucking carbon dioxide out of  the atmosphere, which works against climate change.

The secret is the lime cycle, a chemical process that starts and ends with limestone.

After limestone is mined from the earth, it is heated in a kiln to around 2,000 degrees Fahrenheit, which drives all of the carbon out if it.  After reacting with water, it becomes lime.  When that lime is mixed into a plaster and applied to a wall, it begins to cure.  In the process, the lime sucks carbon out of the air and traps it as the plaster is transformed back into limestone.  Thus the wall becomes as hard as limestone and has recaptured the carbon that was emitted during the manufacturing.

The process is not carbon-neutral, however, as the fuel used to heat the limestone (usually coal) releases carbon dioxide that is not recaptured. Yet Portland cement is heated to 3,000 degrees, so more carbon dioxide is emitted in that process — and cement doesn’t recapture any of the carbon.
1:50 p.m. | Updated (Interestingly, the Environmental Protection Agency just released its long-awaited pollution standards for cement plants under the Clean Air Act.)

For straw bale house construction, lime has emerged as the preferred exterior finish.  It’s durable and waterproof like cement stucco, but unlike stucco it is also permeable to water vapor, so any moisture that might reach the bale wall can evaporate out through it.

““When you think about all the buildings in Europe, or anywhere where it’s old and they have that really beautiful patina charm, it’s all lime.”

Surfing the Internet in 2005, Ryan stumbled upon a lime plastering technique developed by Berbers in Marrakesh centuries ago.  They figured out how to make a waterproof, mildew-resistant wall so reliable that it lined the inside of their water cisterns in the desert.

The technique, called tadelakt, creates a surface that is both silky smooth to the touch and attractive to the eye. The color is rich and slightly mottled, with a faint web of microcracks reminiscent of porcelain. It became popular in Moroccan bathrooms and kitchens. It could also be etched, so Muslim artists used it for ornate designs in palaces and mosques.

The next year, Ryan traveled to Morocco to study tadelakt and then returned to Colorado and became one of the few Americans practicing the craft.

The secret to tadelakt is olive oil soap polished into the wall with a stone.  The final product actually has same chemical makeup as soap scum, but without the dirt in it.  It protects the wall and prevents anything else from building up, so it is rarely necessary to clean it.

Ryan has developed his technique through much trial and error.  He impressed on us that tadelakt is not excessively complicated but that timing is critical and that we needed to learn to use all of our senses to judge when to execute each step.

He had us practice twice, once on a ceramic tile, then on a clay ball, to get a feel for the process before we tackled the two showers in our straw bale house.

We used an electric drill with a mixing paddle to blend lime, crushed marble, pigment and water into a consistency similar to that of frosting.  The marble, which is actually another form of limestone, is usually used to make swimming pools.  Ryan loves it because the finished wall will be almost 100  percent pure limestone.

The owner chose slate gray for the master bath and blue for the shower in the second bathroom.

We sponged on three coats of the plaster, letting each dry a little before putting on the next.  Then with a steel trowel we pressed all three layers flat.

The next step was to apply the olive oil soap and polish the wall with a stone into its final, glowing finish. Ryan bought the olive oil soap in bulk from a company in France.  He also said he shampoos and showers with it and recommends that his clients use it if they need to clean their tadelakt walls.

In his tool kit, he carries an assortment of polishing stones in different shapes and sizes that he uses to polish different shaped curves and corners of his walls.

According to Ryan, the secret to being a great plasterer is to know when to leave your material alone.  We had to wait for sections of the wall to get hard enough so they would not be deformed by the pressure of the stone, but soft enough to soak up the olive oil soap.

This was the moment at which long-ago fresco artists began applying their water-based pigments to the plaster.  In fact, Ryan said, timing was so critical to fresco production it was not uncommon for Michelangelo to paint for 20 hours at a time to keep pace with the lime drying on the ceiling of the Sistine Chapel.

With less at stake than pleasing a pope, we went home to eat dinner, knowing we would return to stone our walls into the night.  We were operating on the lime’s schedule, not our own, as Ryan noted.

The next day we returned to the showers for another round of stoning and discovered to our horror that each shower wall had developed a crack.

With elegant troweling and stoning far beyond our beginner abilities, Ryan fixed the cracks but could not explain exactly why they occurred or how they  could have been prevented.

He said the temperature and humidity in the room, the particular character of the lime, and the way that different sections of the wall cured at different rates could have all been contributing factors.

My wife and I became invested in the process and loved the outcome, so we are considering doing tadelakt showers when we build our own home.  But the cracks made clear that the opportunities to make a mistake are myriad, and we are not sure that we could handle the stress.

Ryan said if we were serious, we should practice a ton before trying it on our own, or call him to come out and do it with us.  The second option sounds better to me. 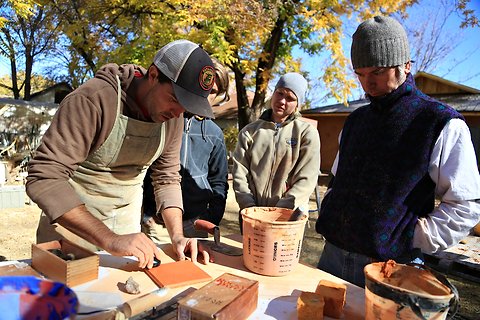